Doing SEO is at times something like being a firefighter: you're fixing things up around the station, you're staying in shape, you're helping with relatively minor situations that come up from time to time, and then everything's burning down and people are running screaming down the streets in a panic, looking to you for solutions.

One of the major times this happened was with the release of iOS 6 in 2012. That update, loathed by SEOs everywhere, caused the vast bulk of organic searches on iPhones and iPads to report themselves as direct (i.e. typed-in or bookmarked) visits in Google Analytics, turning the normal 4:1-ish ratio of organic search visits to direct visits (at least on DMO sites) on its head for those devices. This meant thousands of misattributed visits that directly harmed every SEO's bottom-line number. The problem was fixed after about a year; the scars linger.

That was, as I said, in 2012. Take a look at the combined height of the two lighter areas below in 2012 to get an idea of the proportion of user traffic that used tablets and phones on Simpleview's roster of DMO sites. It's something like 25-30%. Keep in mind that about a third of that mobile/tablet traffic was from Android devices, which had the same problem but not nearly as bad. 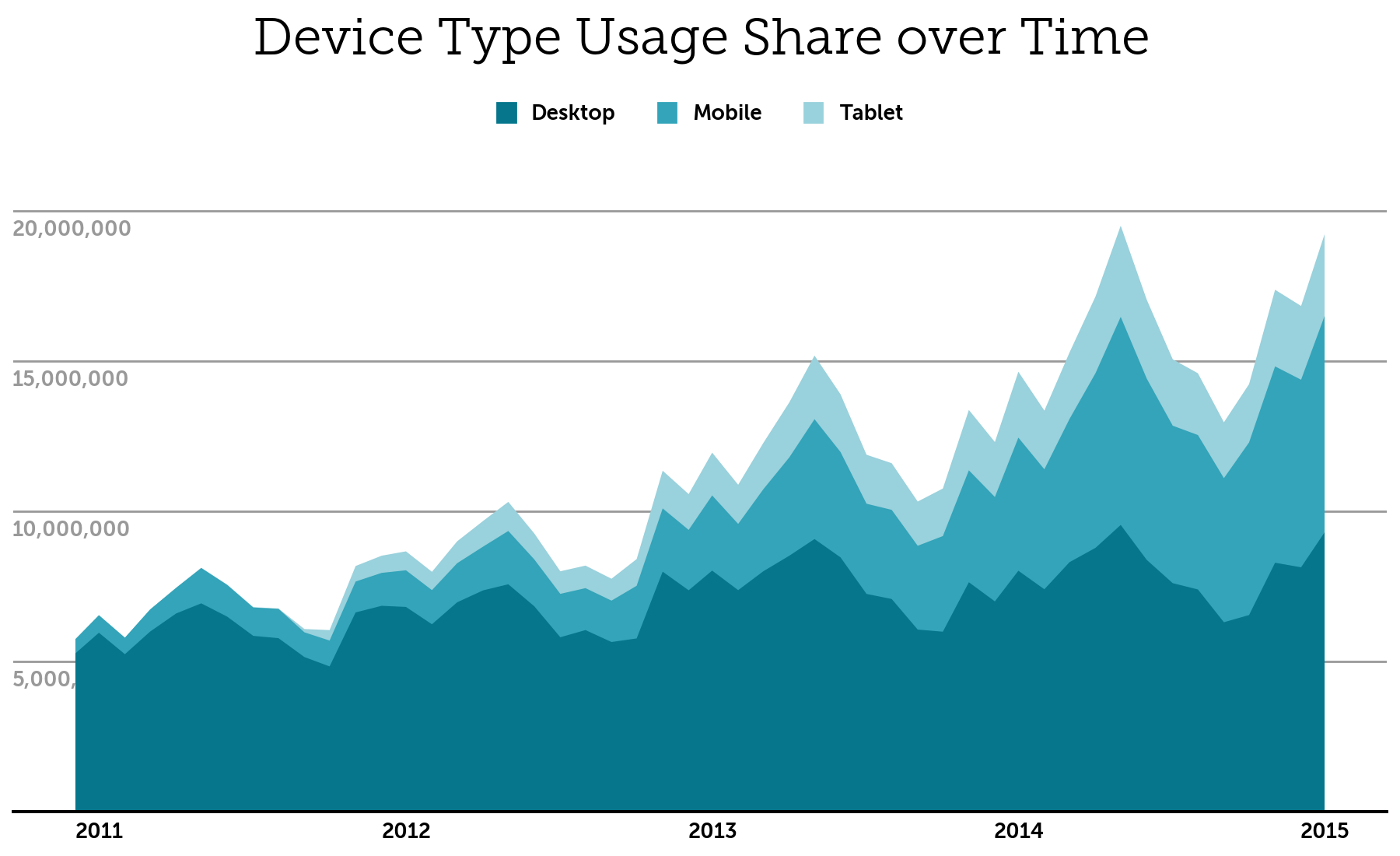 Now it's 2015 and half or more of DMO traffic is coming from non-desktop devices, and we're getting a new taste of data-wreckage in the form of the forthcoming iOS 9. As this post explains, the new Apple mobile OS will for the first time offer content-blocking apps that prevent the phone from loading ads and many tracking scripts, including Google Analytics. And as this post demonstrates, there are some very compelling performance reasons why users might choose to do this. Which means that instead of being miscategorized in your traffic source reports, users of those apps will simply disappear from them entirely. Potentially, that's something like one third of a DMO site's traffic at risk (and rising).

Now, will everyone use them? Ad blockers have been available for a while on Android, but not through the Google Play store, and they require some advanced user gymnastics to deploy. They consequently haven't been a mass problem. On iOS 9, iTunes will be a willing accomplice in the pillaging of your user data.

On the other hand, users will, at least for now, have to make the conscious choice to download and install a third-party app to start blocking all of your tracking scripts. My guess would be that, for the short term, content blockers on iOS will have a noticeable impact but not a devastating one on top-line site traffic numbers, mostly among younger demographics. As time goes by, these apps might become more and more popular or, worse (from a digital marketing perspective), become native OS features and become the default. I would also expect a Google-sanctioned Android version of this functionality to come sooner rather than later (though Google, whose business basically consists of the collection and repackaging of user data, has obvious business interests pushing it away from this sort of thing that Apple does not).

You might be wondering what you can do. The sad truth is that, as of now, no one has a workaround in place that will neutralize the content-blocking blacklists used by these apps. Maybe something will be developed. We'll certainly be looking at solutions now, before the problem wreaks havoc. In the meantime, keep your eyes peeled on September 16, when iOS 9 gets its official public release, and stay on top of your site analytics throughout the months afterwards. If you have stakeholders who hold you to site traffic numbers, prepare them sooner, before your users evaporate, rather than later. Tim Cook is coming with a molotov cocktail in hand.

Paul McLeod has over 6 years of SEM experience and has worked for marketing agencies in San Diego and Tucson, serving clients in the tourism, healthcare and legal fields on content development efforts. Paul is also a Certified Google AdWords and Google Analytics Professional.